Howie lost interest in the Munari mobile at about 5 weeks. I switched to the Octahedron Mobile and he was immediately enthralled.

I'm not going to repeat what's already been written, but you can read more about this mobile and why it is so interesting for this age here! https://montessoriedited.com/montessori-octahedron/

Here is a DIY: http://our-little-nest.com/diy-montessori-octahedron-mobile/ 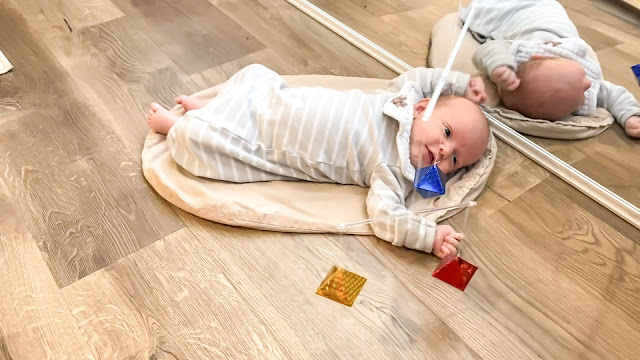 I hung Howie's first two mobiles at his side instead of above him, because he would never look up at them if I put them above him. Consequently, he could hit them. I don't know how much he hit them on purpose or on accident, but he seemed to take delight in the way they moved when he hit them.

He would play with them for long periods of time for such a small baby. Once or twice a day that is, depending on how fussy he was; it wasn't like they were a cure-all magic baby entertainment zone. But on the regular, not constant, occasions when he was fully rested and not-gassy and ready to work/play, he was very engaged with them.