Attempting to Set Up a Functioning Playroom for Clark

July 31, 2020
You guys, I finally re-put together Montessori shelves for Clark, using what I already have. I also put together a whole playroom. I decided to do it in our office. Mostly because I realized that I would rather have toys out on the floor in the office than in the living room. It's actually amazing to never have toys strewn around the living room. The other reason is that Colton and I have been working more while Clark is awake, and Clark likes being close to us while we work. I thought it was appropriate to put his Work in the same room where we do our work.
And so far it is quite cozy, in a good way. The pieces fill out the room and they look right, where they would get swallowed up in the vastness of the living room. 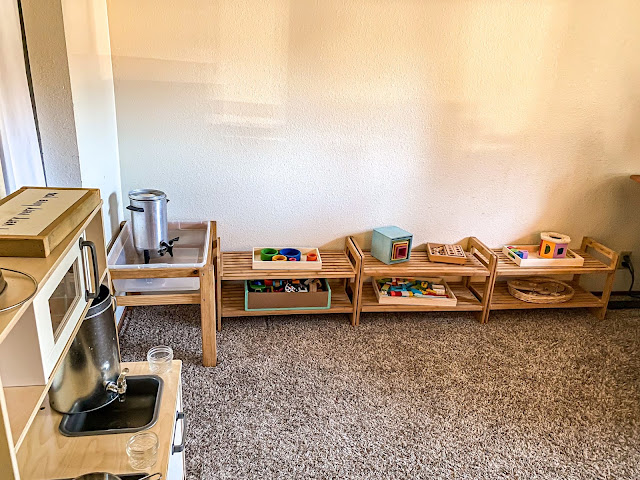 But I also have SUCH a hard time making decisions about it.
For example, should I put the kitchen in the playroom or in the kitchen? I know Montessori parents love putting a play kitchen in their kitchen so that their children have their own place to prepare food, but Clark and I haven't found a food preparation groove for him yet.
Besides, any food preparation I would let him access on his own, he could do in the office, anyway. Right? Such as spreading crackers. I don't even know what food preparation I would let him all of the pieces to, because I don't think I would let him have peanut butter in his cupboard. But maybe I would if his cupboard was back in the kitchen?
But if he loves kitchen play, then I want him to be able to play in his kitchen while we work at our desks. So I am going to leave it here and see how it goes. 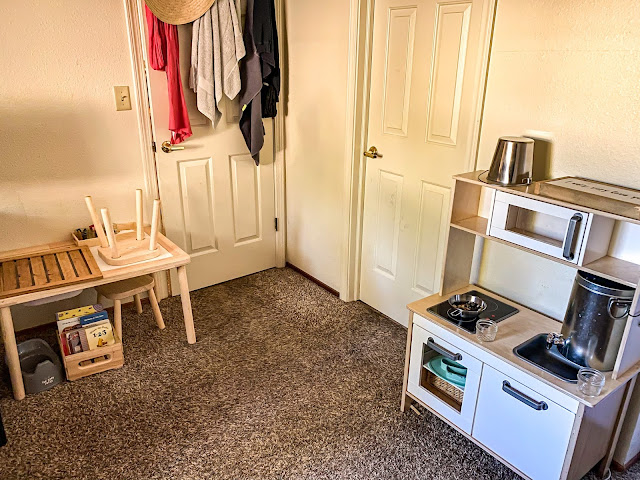 The other decision I am having a problem with is how to use his water table and Ikea Flisat sensory table to accommodate always having a water pouring activity out, a sensory scooping activity out, and having a table space to draw, eat and work on.
And I'd also like him to have his own table in the kitchen for when he gets his snacks out of the fridge, but that isn't the case now that I put the Flisat table in the office.
Actually, you know what? He does have his helper tower in the kitchen and he can put food on the step and sit on the lower step. So I can remind him of that.
My other difficulty has been how to construct a water dispenser set up where he has free access to water, but not to a filling pool of water where he can dump AirPods or other precious things (which he did do the other day).